8. Do You Need a Daily Writing Habit?

A daily writing habit doesn’t have to mean getting words onto the page every day. There’s a lot more to it than that!

Whilst hitting certain word count goals is great, and it is important to have those goals, they are not the be all and end all of progressing your writing career.

So a daily writing habit should be considered doing something everyday that contributes to your future writing career. Be productive every day.

Normally this will be words on the page—that’s what we’re selling after all, right?

But sometimes you need to do some research, some character dev, or some scene planning.

Or even some marketing, advertising, or formatting, for instance.

The key is to do something every day.

But why is it important to do something every day?

Of course you have. You’ve got big plans for selling a million books and writing full time. Or selling a few books, even, and keeping writing as your side hustle. Or even just to finish a book!

(That last one is me. I’m getting there!)

What I am saying is that we’re all working towards something. Whatever your goal may be, you’re here because it’s writing related and we’re all kickass writers who are on the path to success.

(Yes, all of you. Don’t you doubt yourself! I will come over there and poke you until you realise how awesome you are. Don’t test me!)

So if you have that end goal, you need to do various things in a particular order to achieve it.

If you wanna make it as quickly as possible, (can I wake up tomorrow and be a successful author, please? Pretty please?) then you need to do something to contribute towards that goal every day.

Whethere you are working on your first novel or your one hundredth, every day is an opportunity to get closer to that goal.

But does it have to be every day?

Frankly, yes. You’ll reach you set goals faster if it is.

There are some days where you might not need or be capable of contributing a few thousand words to that end goal. That’s understandable. But there’s a whole pile of other stuff to choose from.

Be kind to yourself when you need kindness. But don’t let yourself slack off when you know you could be doing more.

Chronic health issues, much like the ones Kristina suffers from, will force you to slow down sometimes. We do not condone ignoring your body when it tells you that you need rest!

You need to have rest days.

So yes, everyone is different in terms of what they can achieve in a day, but we’re certain that even if you only do a tiny thing on the bad days, you’ll feel better about it in the long run.

And several days in a row of tiny achievements adds up! Rome wasn’t built in a day, after all. And neither is your novel, or your writing career.

Why do we say DO NOT push through and do loads on the bad days?

Well, some people are hard on themselves in the wrong way.

They ignore what their body is telling them (sometimes screaming at them) and push themselves when they should be resting.

If you push yourself when you’re tired, maybe after a stressful day at work, you are exerting energy you don’t have.

Which means you’ll be burnt out for longer.

Which means you’ll be less productive in the long run.

Which means you’re actually pushing yourself further away from your writing goals by working too hard on the days where your body really needs to rest.

If you really do need to get something done when you’re feeling crappy, here’s a little trick for you.

Allocate yourself, say, an hour of working time. Spend thirty minutes of that working, and thirty minutes resting. If you do that, you’ll benefit from the allocated rest time and be more productive in that thirty minutes that you would have been in the whole hour.

But wait, we aren’t advocating for going easy on yourself!

There are lots of people out there that go too easy on themselves! They like to not push themselves when they really need to.

(I know I am guilty of this sometimes…)

One of the biggest things we hear when it comes to contributing to your goals daily is not having time to do this.

OH NO, YOU DID NOT JUST SAY THAT.

As I said before, there is no magic Time Fairy that is gonna come and grant you more time in the day.

You have gotta make time!

There are a multitude of things that could take up your time. Stop prioritising these over writing!

Now, obviously we are not saying don’t feed your kids because you had to write and The Writer’s Cookbook Podcast told you that writing is the most important thing ever.

Or not go to work.

Or not shower and eat.

There are some things that do come before writing, of course. Essential things.

But you don’t need to do those things for 24 hours of the day! You can make a little time. Even if it’s only 10 minutes.

Think of it this way—the average writing speed is 50-80 words per minute. If we take the lower end of that, that’s 500 words in a 10 minute sprint. Not too bad!

Even if you allow yourself the odd day off, you can easily write a first draft in less than four months. That’s crazy, right?

And, of course, some days won’t be writing days. Some days will be planning days, research days, etc.

Even still, it goes to show that even if you only dedicate a very small amount of time to writing each day, you can go a long way!

What else can you do to be productive every day?

The key is to structure your time. Know what you are doing beforehand so that when you sit down to be productive, you don’t waste any time deciding what needs doing.

You might end up doing research, character development, plotting, etc, etc. But if you persevere, you will get that novel done!

Then, once you are done writing it, put it in a drawer and maybe plan something else.

Come back later to edit, after some time has passed.

So that’s gives you plenty to be doing every day!

The main thing for me is to feel like I have used the day, rather than squandered it. Even if I write a scene that later gets cut, it still helped me to realise that scene wasn’t needed. So I am still one step closer to the dream. I still contributed to my future.

It’s about doing something to work towards those goals every day.

Getting words onto the page, physical or digitally, is obviously going to be important. But not necessarily the most important.

8 Resources Every Writer Needs, and 1 You Don’t

Preorder Your Copy of Productivity for Writers! 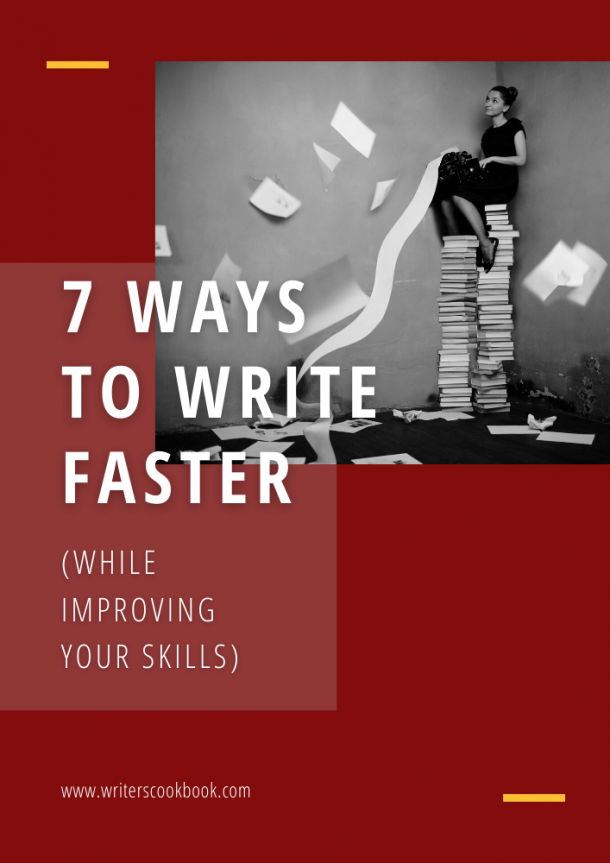