I can’t remember when I first heard about ProWritingAid. It’s one of those tools that I’ve known about for a long time but until recently had never used.

Unlike Grammarly, it doesn’t have a strong social media presence.

Unlike Hemingway, it’s not particularly pretty.

But, compared to Grammarly and Hemingway, it picks up on much, much more.

Please note that all links in this post are affiliate links. You won’t pay any extra, but I’ll make a small commission if you purchase through me 😊

All screenshots are from the first chapter of my latest book, Behind the Spotlight.

Why do you need ProWritingAid (or any grammar-checking tool) in your life?

To me, writing is like driving a car. The longer you’ve been doing it for, the more likely you are to fall into bad habits.

We’ve all shared a car with a relative that thinks they know everything there is to know about driving but that make you feel like you’re on a white-knuckled ride the whole time you’re in the car with them.

Then there’s that other relative that drives so slowly they’re going to cause a traffic jam on the motorway.

These, while very different issues, are both painful for people on the receiving end.

And so are your bad writing habits.

We all have them.

I have a penchant for passive voice which I didn’t realise until I started using ProWritingAid, for example.

My boyfriend (who isn’t a writer) likes tools like this as they help him to improve his grammar—and, in the case of ProWritingAid, they also explain to him why said change needs to be made.

What does ProWritingAid check?

It suggests ways to improve your writing style, such as removing passive voice or hidden verbs.

It checks your text for grammatical errors and possible words that you’ve misused.

This is one I’d never thought of before, and that it would be impossible to do yourself.

ProWritingAid ‘compares the frequency of commonly overused words in your text to published writing to give you an indication of where you may be over-using words’.

It runs your writing through a series of readability checks. This helps you to figure out if your writing is suitable for your audience.

When reading, we gloss over cliches. The image that they were designed to create was lost to us a long time ago. They don’t provide any real value, but we use them without realising it sometimes.

Redundancies are also a waste of space in your writing—why would you explain something to a reader twice?

200 of the most commonly used words in the English language are considered ‘glue’ words. These ‘glue’ our other words together. If we use too many of them, though, they can slow our writing down and make our piece difficult to read.

ORIGINAL: Dave walked over into the back yard of the school in order to see if there was a new bicycle that he could use in his class.Glue index: 60.7% – Sentence length 27 words

REDRAFT: Dave checked the school’s back yard for a new bicycle to use in class. Glue index: 42.8% – Sentence length 14 words

These kinds of words and phrases make it more difficult for your readers to understand your meaning. They can make you sound kind of obnoxious and overly formal, too.

* (I am very fond of the term ‘due to’, though, so I’m not going to give that up entirely. Hope you understand.)

We all have that one word or phrase we’re notorious for overusing without realising we’re doing it. This picks up on them so that we can find alternatives.

This looks for a word or phrase you’ve repeated within a short space of writing. You can specify how many words this is in your settings.

The structure check ‘compares your usage of different sentence structures to published texts in your genre’.

It tells you how many words start with a subject, a verb, an infinitive, etc.

This is one of my favourites features. It visually demonstrates your sentence lengths in a bar chart.

Varying sentence length is key to keeping your readers’ attention, and there’s no better way to see if you’ve achieved this than with a bar chart:

Always useful in any writing tool.

When we’ve been writing about something for a long time, it’s easy to forget that certain words (such as B2C) are acronyms.

It’s good practice to explain what they stand for when first using them.

This check also makes sure you’ve stylised them in the same way each time they’re used.

One for the fiction writers: it highlights your dialogue tags.

General writing advice is to avoid anything other than ‘said’, so if you’re prone to using other types of dialogue tags, it’ll help you to see where and if it really adds any value.

Picking up on inconsistencies in your own writing—or longer texts—is suuuuuuper hard. This helps to find them for you.

Another one for fiction writers: it picks up on slower parts of your manuscript.

This can be useful, but I’m still not 100% sure on it: it uses introspection and backstory as examples of ‘slower parts’.

Sometimes these scenes are useful—particularly introspection.

Readers need to understand a character’s motivations behind a decision, especially in something that’s character-driven such as romance or literary fiction.

However, if you have pages and pages of introspection, you definitely need to go through the pacing check.

Using pronouns repeatedly can make our writing clunky. This checks for them.

It’s useful if you’re in the habit of writing pieces that say, ‘I did this. I did that. I did this next’.

Alliteration is when we use the same letter to start two or more words in a row. It’s useful in a lot of contexts.

Homonyms are words that sound the same but are spelt differently.

The most common ones are you’re and your, and their, they’re, and there. If you’re prone to mixing them up, this is the check for you.

Another one of my favourite checks (because I’m quite good at it).

This check ensures that your writing flows.

This check—which you can pay for separately—scans webpages, books, and academic papers to find parts of your text that are in other documents.

Most useful for academic writing. Also useful if you’ve used a ghostwriter. 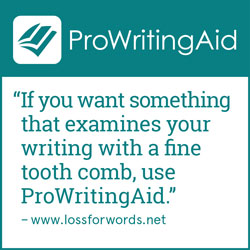 The free version alone checks more than Grammarly or Hemingway. It’s therefore a great place to start if you’re looking to improve your writing style but aren’t sure if you want to spend the money yet.

You can also create a house style to get it to check items of your own creation, but I haven’t fully figured out how this works yet.

It’s not the prettiest tool, but a lot of the best writing tools aren’t (see Scrivener for another example).

It doesn’t work with every website—I’m writing this straight into WordPress and it doesn’t play well with Gutenberg, for example—but it works with most.

It depends on how the website is built: how well it plays with a site isn’t ProWritingAid’s fault, it’s more down to the website itself.

You can email them and suggest places you’d like them to integrate with, though.

What does ProWritingAid work with?

** Means that it can open a file of this type, but that it can’t integrate directly with the program itself.

Both versions work with Google Docs, but you have to use the same email address for Google Docs and ProWritingAid (big downside IMO; I hate GMail and never check my account so would miss out on all their emails).

There are two versions—free and paid.

The free version gives you many of the most useful features, but not all of them.

You’re also limited to analysing up to 500 words at a time.

However, as I’ve said, it picks up on a hell of a lot more than most free grammar checkers.

It doesn’t push you to upgrade unless you try to use something that isn’t included, either.

Even if you don’t invest in the paid-for version, it’s worth having the browser extension alone. You’ll be surprised at how much it picks up.

You get the desktop app (featured in the screenshots above) if you upgrade to the paid version.

If you’re looking to try the software, I’d recommend testing it out with the free version first.

Or, if you’ve got something you want to check over imminently, you can get a two-week free trial of the paid version.

If you’re happy, invest in it for a year. Then, if you’re happy after that and still find it useful, you can buy a lifetime licence for £210.

Grammarly costs this for a month. You’re paying for a more well-known brand, but if you ask most people in the literary community, the majority will tell you that they prefer ProWritingAid.

Honestly? I think ProWritingAid is a great all-rounder.

I’ve known people new to English, people who want to brush up on their grammar for business purposes, and even us writers learn something from it.

So long as you don’t think you know all there is to know about writing and your style can’t possibly be improved, you’ll get something out of it.

Given that Mac OS X Mojave’s spellchecker is terrible and picks up on all sorts of nonsense at the moment, it’s also worth checking out if you’re a Mac user. There’s nothing more disorientating than being told that you’ve misspelt ‘your’ or ‘there’ 🤨

So, are you ready to become a better writer (and self-editor)?

Then give ProWritingAid a go today.

What have you got to lose? Or, should I say, what do you have to gain? 😉

The Different Levels of Editing: What Do You Need?

Editing Fiction: When to DIY and When to Outsource

What I’ve Learnt so Far Rewriting my Novel